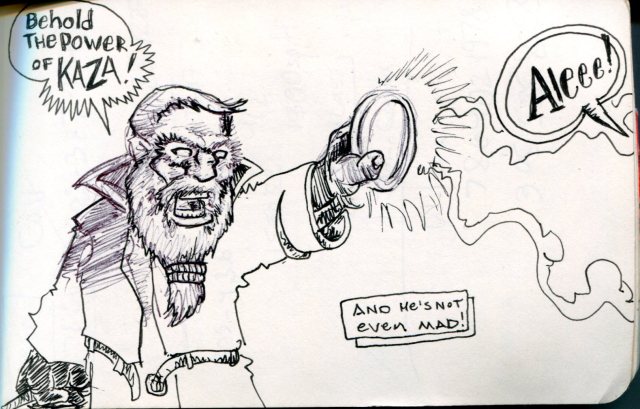 KAZA was Dwarven Pariah ( 2nd Edition Dwarven handbook) I made once, and revisited here in this sketch (should have Blocked in the blacks) . I always thought of all the Priest/Cleric you could be, a Priest of Magic has to be, in the long run, the most powerful. I mean, I remember it being said/written once, that the most powerful class at 20th level (the top level to me, damn it) was the Cleric, because by then, you are not only powerful, stats and ability wise, but supposedly you are having coffee with your god daily and hanging with Planetars (or Baatezus, depending who you are) so technically you can strike down such hardcore furious anger on anyone who comes at you, it would be hard to be stopped. And this is without magical equipment, out of the box, raw.

So If you were, say a Cleric of Boccob, God of Magic, and you had levels and access to Wizard spells, you could bring down ever SERIOUS-er rage too. Now sure, your no Wizard but if you have retinue of Holy/unholy beings, access to ancient spells and awesomeness, and your own armament of badassery, well I would find it hard pressed for ANYBODY  to fuck with you…. at least thats my theory.