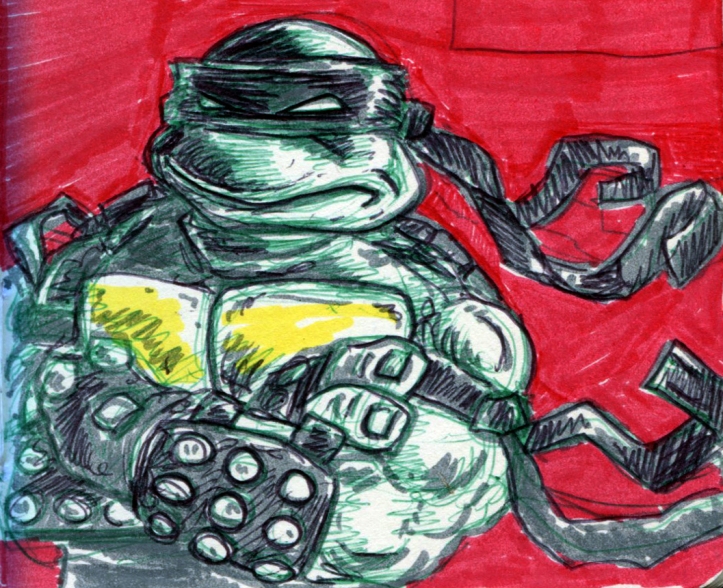 Leonardo, in Black, TMNT redesign. I mentioned this sometime back and finally got around to posting on here; In doing this little redesign exercise of the Turtles, I wanted for them to reflect there personalities more, but didn’t want to change them too much… except for Leo. being the leader and most responsible of the group  i wanted that to show, and maybe take a deadly turn for him. For him to start  showing a seriousness to everything that the others couldn’t fathom. i didn’t want him to be badass but maybe the use of armor, this sort Shredder like look would lead, ultimately, to him leading the foot clan, taking it over, for the good, of everyone to keep it responsible. it’s a far going story where after defeating that keeping the city safe, the Turtles themselves would fracture. I had a storyline where Michelangelo would become author/blogger Michael Angel and lead following through his writing and his comedy style, and have the most civilian life of all of them. Donatello would be the background of a tech firm, and would be soon, enthralled with his work and what he could do. Ralphael keeps on with eternal vigilance, maybe torn by the Death of Casey Jones, April widowed with a daughter. Ralph blaming himself, and April agreeing. Splinter is gone long dead after Shredder got his revenge. Shredder is gone after the turtles got theirs. I wanted it to be the Beginning after the end, and when it seems that Ralphael and Don are leading a self-made army vigilantes (ala Kick Ass) to Leonardo and his new Foot Clan, Michelangelo decides to out himself on national Television as a mutant turtle, and everything that happened with TCRI, the foot, aliens, etc.

So what do you think, too much?