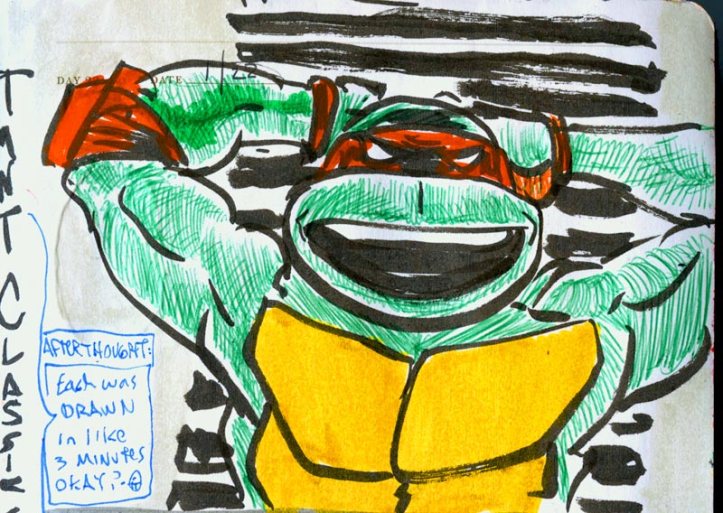 Ugh, what can be said about Michelangelo, to me the most annoying turtle of all the TMNT.

But you say “Juan, how could you?” and I would say “shut up, and hear me out”

Lets put aside the ridiculous cowabunga clown idiocy from the cartoon, because that will stick most in your mind about him. No, let look at some of the better ideas of him, be it in the original Mirage series or Later in the Image series, of being the most HUMAN of TMNT. The one who seems to love life the most, and would be fine to lay nunchuk down for life and fun. That I always thought made him the most poignant of the turtles, and least mutant of them. I always loved the idea of him being a writer. Being the one who might tell the tale,s but also maybe finding his own voice through his art. I could see that.

One of the stories, that I may need to double-check about, was the “Soul’s Winter” storyline by Michael Zulli, who I thought really bought forward the idea and wonderment of Michelangelo and his humanity while being drawn by the badass Michael Zulli. I loved the look but also the feel of it.

One day, I hope to do the little comic project i have planned for the TMNT, not so much publisher or official, but to sit down and just DO IT, would be cool. Soon, maybe.