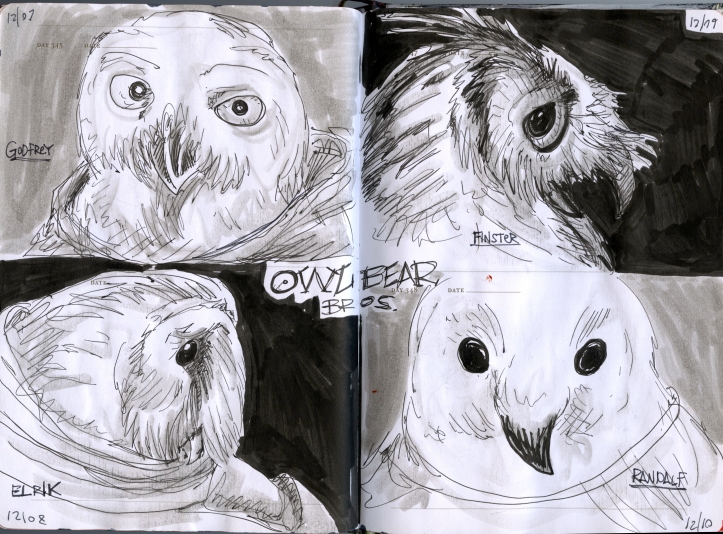 Since I already posted about Finster yesterday, I decided to just put up the idea behind the ©OWLBEAR BROTHERS on here for people to pursue. Fantasy Comic Concept I was working on of mutated Owlbears, small in stature, but trained in different ways by a Wizard who live a rather peaceful life until the day the Wizard passes and then they must go out into the world for the first time, and find answer to not only his death, but THEIR LIFE.

Pretty Much, in a nutshell, they were Fantasy version of the Ninja Turtles. At one time, I was even going to run them as a comic that existed IN the Dragonbreath universe, something Ridlee always goes and buys. Just fucking META on META, MAN!

The story itself was going to be about them exploring a world their “father” the Wizard protected them from, and finding the fantastical worlds there, while the evil that bought their father down, would hunt them. Yadda yadda yadda. It was going to be a fun series, something I could just let loose on, reminiscent of the old Dragonball Manga and/or Prophet comic now.

This concept came around just from just drawing Owls, really. I was doing some practice, decided to draw wild life for a bit and then went and started drawing random Owls I would find on the internet. Being a D&D junkie this naturally led to Owlbears, which if you don’t know what it they are, here you go.

After I get over the CURRENT projects we have going I will definitely get on this one.

Remember folks if you dig something and want to see more of it, hit me up and let me know. I will get around to it eventually, but if people dig it, I may bring it out of the back burner.

I think I’ll be posting more of this, all this week.