STATION ID: The Underpants​ Gnomes had it right

Late, but then again, right on time?

At times when it comes to all the BRILLIANT ideas that come into the contraption thats called my mind, I recall the old gag of the Underpants Gnomes from South Park, basically, the reason WHY these Gnomes stole underwear from people: 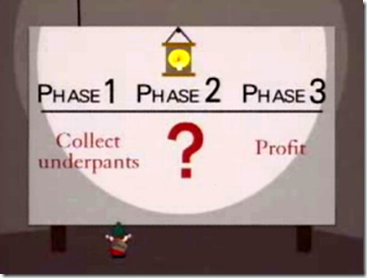 Looking at my little PLan of Action/Illiterate Hostage letter from last week, I felt this has been the model for most of my comic making career. The whole “if you build it, they will come” wears really fucking thin after 20 years of making comics, and 10 of which as an indie publisher. I’m not neccesarily frustrated, because it’s an awesome ride and I’m going to keep doing it, but the way how media is formed and made, is problematic to say the least.

This is the things, as an artist right now, it’s never been easier to show and share your work than EVER. It used to take a huge obnoxious effort to break the stratosphere of obscurity and get your stuff “out there” whatever the fuck it was. In a way it was simpler, just harder, overall. Now with the boon of the internet, it’s a flick away.

I had the conversation with a fellow artist the other day about how I’m going to blow money on the new Iphone. He was almost shocked because if you know me, I am the most practical person you will ever meet as far as money. (READ: cheap) I think at this older age, I would venture to say i’m becoming a cheap ass too, but the occasional meal would betray that for me, since I like to eat well and drink well, here and there.
But I argued that the phone had become a type of mental swiss army knife. Now, I carry a knife with me at all times. It used to be super practical when I was working in the body shop, and then later on the ramp at the Airport, but when I went into office work and studio work, it becamse less so. Opening the store it was on hand all the time. In my daily carry, I have some type of blade with me, this time reduced to a small Leatherman Style CS on me. It works and is awesome but I do wish for a larger blade. My phone is the mental version of all this . Just like the knife can open boxes, sharpen pencils, take apart an action figure, etc etc, the phone is being used to handle social media, trakc my money, watch films and tutorials, constant communication, working on this blog and even podcasting. How can I NOT put money on it when it’s always in my hand and/or on my person in someway being used?

What are you doing with it?

See you next week until then don’t be another dick in a bag of dicks, k?