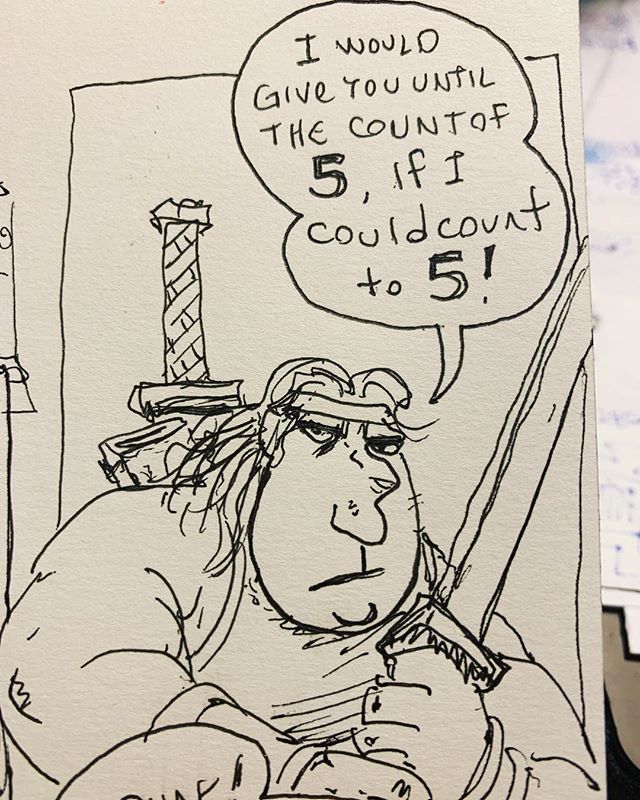 Instagram: http://bit.ly/2ImETaJ DAILY DRAW:
Groo the Wanderer by Sergio Aragones; like Conan and Fantasy books? Like the 3 Stooges and the movie Airplane! ? Then yea goota read Groo!
Groo (the epithet “the Wanderer” is informal and rarely mentioned within the stories) first appeared as a parody of the brutal sword and sorcery heroes who were popular at the time of his creation in the 1970s, especially Conan the Barbarian as presented in Marvel Comics. Groo is a large-nosed buffoon of unsurpassed stupidity who constantly misunderstands his surroundings. Possessed of superlative skills in swordsmanship (the only task at which he is remotely competent) he delights in combat but otherwise is a peaceable and honest fellow who tries to make his way through life as a mercenary or by working odd jobs. He is incredibly accident-prone, and despite generally good intentions causes mass destruction wherever he goes. Most of his adventures end with him either oblivious to the mayhem he has wrought or fleeing an angry mob. His penchant for destruction has become so widely known that just the news of Groo approaching is sometimes enough to cause chaos among the population. Groo occasionally meets with respect and good fortune, but it does not last. Businesses, towns, civilizations and cultures have all been unwittingly destroyed by Groo. Such is Groo’s incompetence that so much as his stepping onto a ship can cause it to sink.I’ve been a fan for years and had to give it a go!
#groothewanderer #groo #sergioaragones #madmagazine #comicsruleeverythingaroundme #dailydraw #drawdaily #work #pen #sketchbook #comicsartist #comicart #funny #lol #comedy